Increasing number of re-municipalisation cases and enhancing public influence in service provision indicate a major policy shift in public service management. The former privatisation trend in water management and other infrastructure services seem to be reversed. The question is whether international donors, financing institutions and technical assistance programs acknowledge these changes and take into account this new political reality?

Private sector participation in public utility services was the critical part of New Public Management since the early 1980s. As a response to the growing but inefficient public sector, it aimed to incorporate market incentives, private sector management techniques and promoted greater customer focus in public service provision. The standard forms of privatisation and liberalisation obviously had diverse consequences in developing, emerging and in rich countries. The specific institutional environment and the administrative traditions determined how successfully these principles were introduced into the domestic practices. 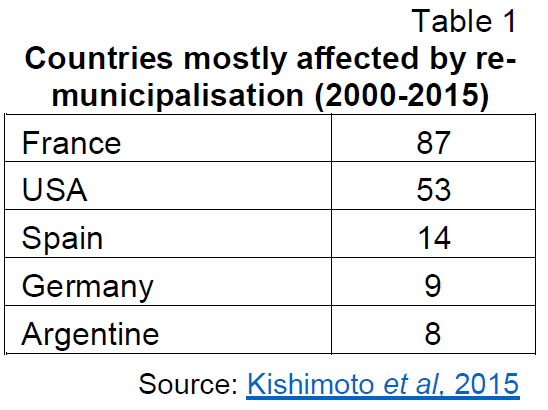 However, following three influential decades on public service management, the policy priorities and the social landscape has gradually changed. One of the most consistent research and activist program on this systemic transformation collects the re-municipalisation cases in the water sector. According to this recent publication of the team, there are 235 cases in 37 countries when formerly privatised or privately managed water and sanitation service organizations were returned back to local governments since 2000. Table 1 shows that France, with rather fragmented municipalities was affected the most, as 87 local governments found a new form of service provision. It is followed by the US and other European countries, with large cities, such as Atlanta or Berlin, Stuttgart on the list. 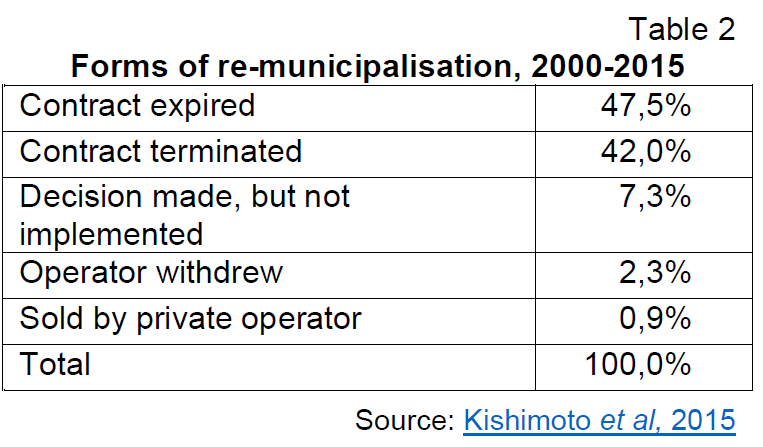 Re-municipalisation does not necessarily mean a  hostile takeover by the local administration. Almost half of these changes was peaceful, simply finding a new form of service management when the contract with the private service organization expired (Table 2). The other half of these re-municipalisation cases were initiated by the client local governments. The private partner had to be compensated, the shares were sold or they simply withdrew their offer. The new service organization might be some form of inter-municipal cooperation or association, a public entity with outsourced services.

The contractors were typically the large international companies providing various infrastructure services or in the developing countries the traditional business partners (Portugal in Mozambique, Spain in Venezuela). As the French companies were the most active on this global market, they were seriously affected by the re-municipalisation: Veolia water unit lost 80 contracts, but SUEZ (39) with its US subsidiary, United Water (18) and SAUR (18) were also affected. Terminated contracts, which had a negative impact on company finances, e.g. the Veolia group environmental services company shares now are at the same nominal price level as they were in 2003 and they could not recover after the 2008/2009 crisis.

According to the anti-privatisation activist movements there are both economic reasons and social consideration behind these contract closures. The financial arguments are the usual ones, such as increasing cost of services, delayed investments, high dividends paid from cost savings, overpricing contracts for own subsidiaries, lack of cooperation between various contractors under different municipal departments.

New elements of this re-municipalisation movement were the greater emphasis on citizens’ or workers’ objectives and the stronger community focus. According to the activists, enhanced local accountability will make services more effective. The public service providers are more concerned about working conditions and safety. The public partnerships will make water service management more inclusive and consequently more sustainable. Even the successful benchmarking movement in the water sector is criticized because of homogenizing water services, neglecting alternative forms of service management, focusing on outputs instead of outcomes and especially because of ignoring social impacts.

There are social movements supporting these values, even in the UK, which was the first country promoting privatisation three decades ago. The civic programs such as “We Own It” or the anti-PFI campaign all aim to reverse the privatisation trend in public service management. The exclusively public water service operators themselves have also recognised this need for renewed policies and service management methods by supporting water operator partnerships and creating their own international association, e.g. the Aqua Public Europea.

The offered solutions are rather simple ones: promotion of inter-municipal cooperation for achieving economies-of-scale and creating public-public partnerships. Promoters of this movement are aware of the future problems when water services are taken over by the municipalities: local administration lacks expertise, databases developed by the service organizations are not accessible, transparency and inclusion mechanisms have to be developed in this sector.

The question is whether these politically motivated social preferences in local service management and the re-municipalisation movement will have any influence on the investment policies and the major donors’ programs and priorities?

In the meantime water became a scarce resource and clean water and sanitation is one of the long term targets in global development. Ensuring access to water and sanitation for all is part of the seventeen Sustainable Development Goals (SDG) targeted by 2030. It aims to provide access to potable water to 663 million people and to the three times more who still use contaminated water, to help the 2.6 billion people who have no basic sanitation services and where 80% of human waste water is directly discharged to rivers and the sea.

Infrastructure in general is critical for sustainable development. Other areas of SDG focus on affordable and clean energy, it is a recognized condition of industries, innovation and urban development. The overall objectives of infrastructure development emphasize the need for smaller scale of facilities (with economies of scale in project preparation), use of green and  alternative technologies, need for integrity and curbing corruption in infrastructure investment and local service provision.

Here the key question is how these public services are financed and managed, as ultimately economic principles of cost recovery, economies-of-scale, market incentives, etc., determine their finances. As it was discussed in my other note on this topic in this blog, despite ending the “Washington consensus” on liberalization, privatization and deregulation, the market based financing and management policies still prevail. With the great recession of 2008/2009, the funds available for public and private investments have contracted and in general the trust in private sector significantly declined. But by now PPPs are back and the new infrastructure investments, for example in alternative energy supply and green technologies need private sector participation both in developing and rich countries.

International financial institutions, such as the World Bank have realized that development assistance methods should be improved. Sources of financing will be diversified where public sector aid has a catalytic role and more private sources will be channelled into official development assistance (ODA). Allocation policies should recognize the different needs by country types (e.g. in fragile states hit by conflicts) and make domestic revenue mobilization as a condition of aid in developing countries.

International development will rely on new donors from emerging countries to a greater extent, which will also reform aid policies and might introduce innovative sources of financing. The China led Silk Road Economic Belt drive, the newly established Asian Infrastructure Investment Bank (AIIB) or the Islamic Investment Infrastructure Bank to be launched by the Islamic Development Bank are all strong examples of these shift in international development. The traditional members of Development Assistance Committee of the rich countries with a targeted level of ODA as 0.7% of Gross National Income, also want to respond on these new requirements by increasing the role of output based aid and untying aid by opening competition for donor funded procurement.

However, the ODA statistics show that multilateral agencies represent relatively minor financial share in official development assistance (according to the definition of ODA 25% of the allocated funds should be grant). During the past decade they provided only 9%-11% of all donor funding (see OECD Query Wizard for International Development Statistics), which might be explained by the transforming objectives of ODA. Share of economic infrastructure and services, such as energy, transportation and communication is increasing and presently represents 19% of all aid and they might be preferred by country donors.

The water and sanitation sector is an exception, here 4% of total ODA is used, but the role of multilateral organizations is increasing (Chart 1). Multilateral agencies represent 42.7% of total aid commitments and they provide a broader package of policy tools for the recipient countries. So in the water sector donors’ priorities matter and international development policies influence domestic practices a lot.

Re-municipalisation in local public services and the gradually transforming development priorities show that there are signs of conversion in local and in international practices. Despite these visible changes, the new public sector focused local service management still might have diverse influence on donor priorities.

The first option is that the recent re-municipalisation trend will remain marginal. So the private sector and market focused development assistance policies will be continued. Perhaps minor shift in aid priorities, greater emphasis on conditions of service effectiveness, social accountability will be introduced, but basically re-municipalisation will have no impact on ODA. It will further weaken the values represented by these activist movements.

Another possible scenario is that re-municipalisation will be only temporary: the recent nationalization experiments and centralization policies turn out to be unsustainable. There are several cases for example in Hungary, that the new state run water companies accumulated huge losses, in municipal solid waste management the centralized tariff collection does not work and the remaining municipal service companies go bankrupt. It will verify the conspiracy theories, which say that the present populist policies in the utility sector are only slogans for the benefit of the political-financial elite. Under this scenario the present nationalization will be followed by privatization in a more restricted market environment. Obviously it will be in line with the private sector focused international development policies.

Finally, it cannot be excluded that the popular movement of claiming greater customer influence and community control in local public services will be further strengthened. Similarly to the civic pressure against corruption and for greater transparency in the late 1990s, it will bring new values to international development and donor financing. Presently the public financial management methods, the accounting, budgeting and reporting practices of international financial institutions have all incorporated those transparency and government openness standards, which two decades ago seemed to be moral claims from outsiders, only.

But how deeply re-municipalisation will influence donor policies and in what way will transform development priorities, it is remained to be seen. Competing scenarios might prevail. Donors are not unified and their domestic political and development policy priorities matter a lot. Also the ODA recipient countries might need different interventions. Perhaps more community based service management techniques are needed in developing countries and stronger private sector participation might work effectively in countries with developed regulatory institutions. However, it is for sure that donors and development agencies should respond on these new re-municipalisation values in one way or another.