For a long time the Belarusian authorities characterized their national and subnational budgets with a welfare orientation. Every year before the republican budget adoption the Belarusian parliament declared about its welfare priority. This brief note focuses on two questions: (i) what tendencies of social budgetary policy can be observed in the time of economic recession and (ii) how consistent was the welfare orientation of the central and local budgets in practice.

Sources of welfare spending in Belarus

In recent years, development of the Belarusian welfare sector (health care, education, physical culture, sport, culture, mass media and social policy) was characterized by significant growth. During 2005–2014 the personal income per capita has increased in nominal terms by13.9 times, expenditures on final consumption have raised  for 10.7 times and GDP per capita in 12.2 times.

However, the growth of these indicators was promoted not so much by structural reforms and economic modernization with compliance of market rules, but more by exporting Russian cheap oil based products in the EU countries. It  had brought big "profits" for the Belarusian economy in the form of customs duties and filled up the national budget with tax revenue from foreign economic activity. In the last decade share of customs duties in the national (republican) budget revenues has increased from 7.9 up to 14.4 percent, and in 2011 and 2012 it was respectively reached 28.0 and 26.8 percent. In addition, injections in the form of loans from international financial organizations and other fraternal countries have pumped the budget of Belarus. 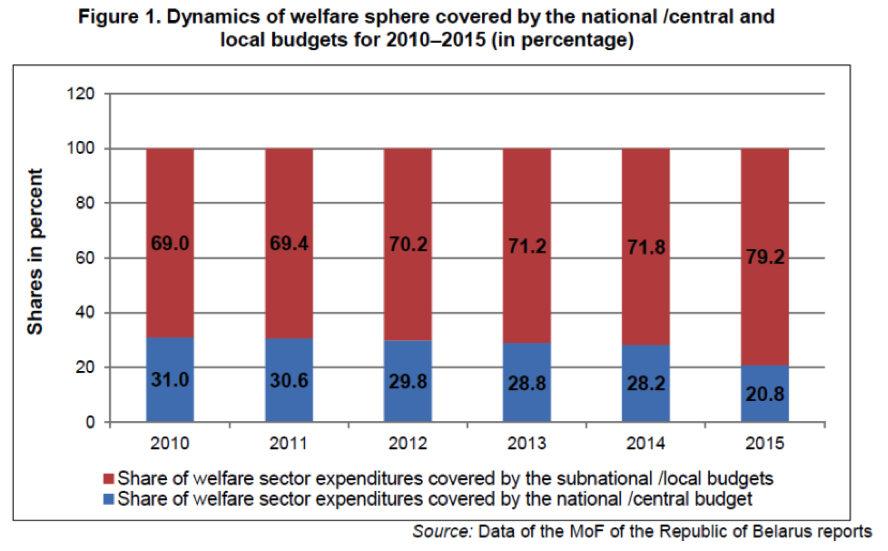 In 2014 welfare sector expenditures have captured more than 20 percent of the national (central) budget and nearly 50% of subnational ones and their shares in GDP reached 3.5 and 8.6 percent, respectively (Figures 2 and 3). 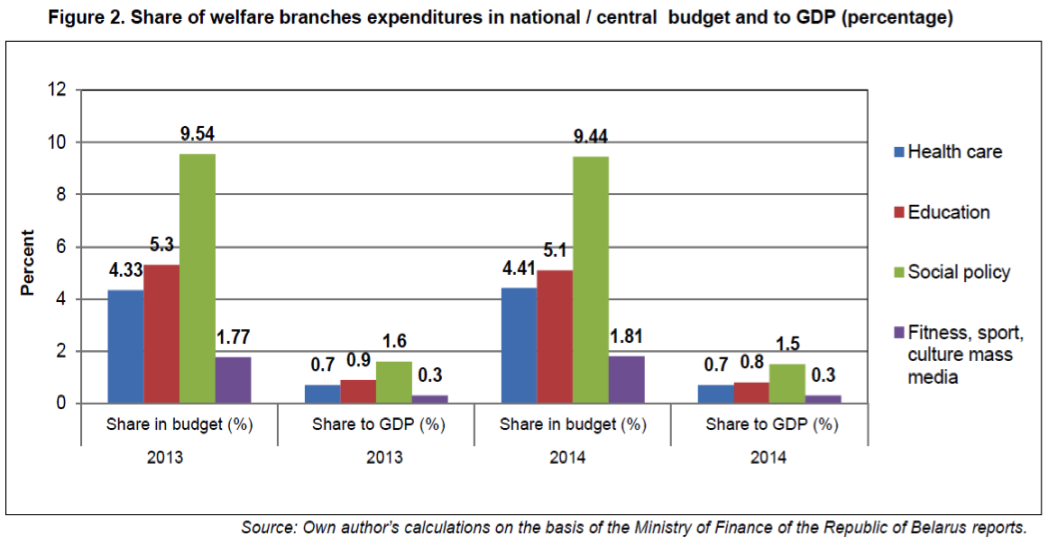 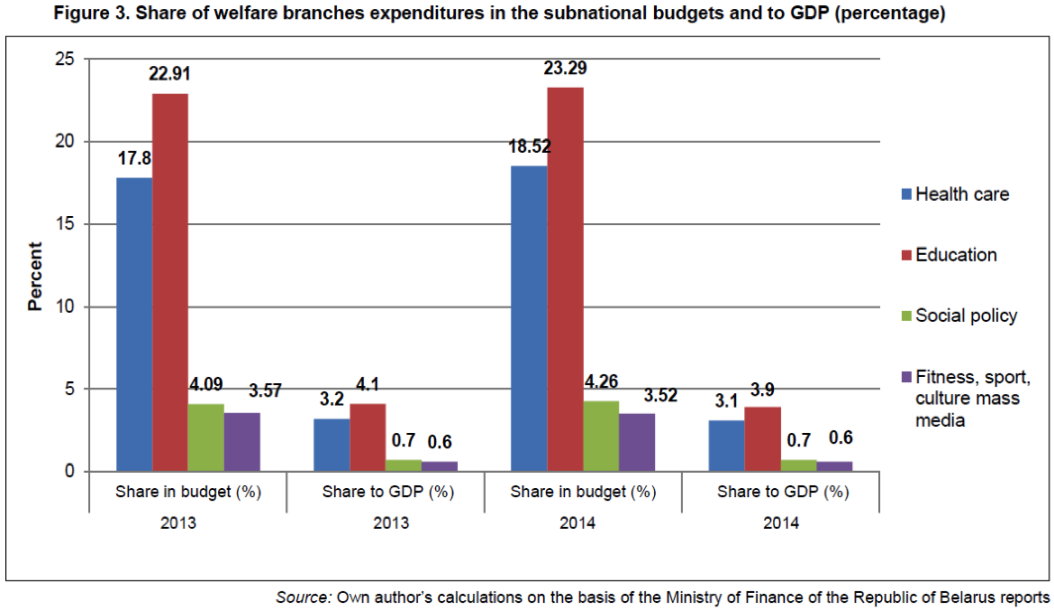 It is important to  note that the welfare expenditures are not equally developed in the subnational (oblast) budgets. In 2014, the share of expenses on welfare was the smallest in the budget of Minsk city (37.96%) and in the Minsk oblast (48.34%), while the highest in the Vitebsk oblast (54.7%). It can be explained not so much by diverse local budget preferences, but by the oblasts’ revenue potentials. In Minsk city, in the Minskaya oblast there was a rather strong revenue base for covering the standard welfare costs. Therefore these oblasts had an opportunity to re-direct the remaining revenues to other areas, such as housing and communal services, housing construction, law-enforcement activity, maintenance of order, etc. 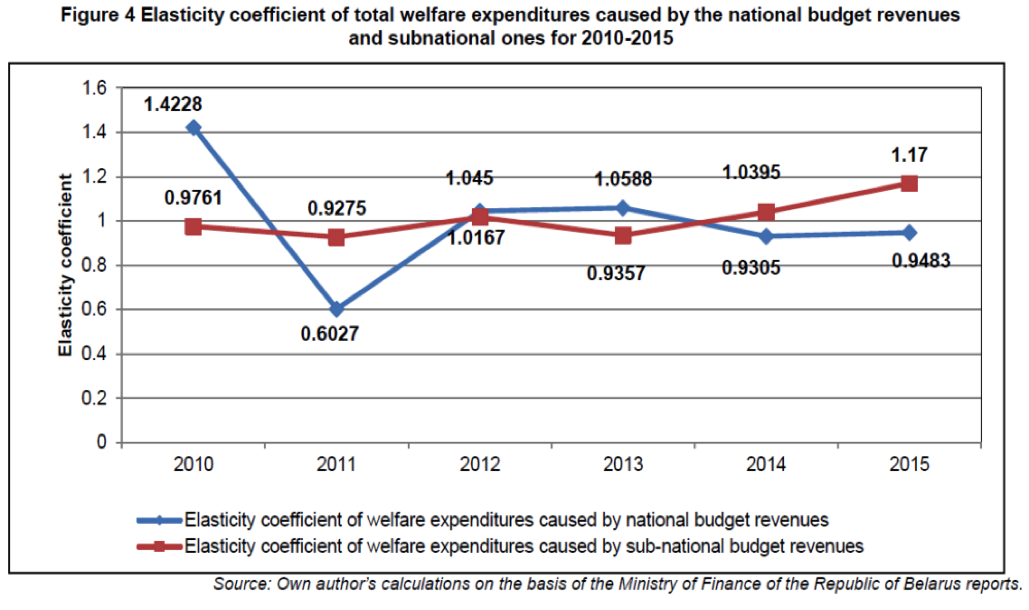 Our analysis shows that for this period government welfare policies both in the central and in the subnational budget were inconsistent and often changeable. In the national budget, in 2010 all welfare expenditures had a high priorities. However, in 2011 this policy failed, then the situation got better in the following year, and in 2014 and 2015 failed it again. If we take an elasticity coefficient for welfare expenditures in the subnational budget revenues, then it is possible to find a different trend: cutbacks in 2010, 2011 and in 2013, but increase in 2012, 2014, 2015.

The reason why elasticity coefficients of welfare expenditures are different both at national level and subnational one is that expenditure functions for these levels are different. For example, if we take education, the universities and higher educational institutions are funded from the national budget and the primary and secondary schools, pre-schools from the rayon local budgets. In health care, the special medical centres are funded by the national budget and the regional, interregional hospitals are by oblast (local) budgets.

Despite regular government promises to make budgets socially-focused, the welfare policy remains unstable. As our assessment proved, during the last five years the Belarusian governments’ efforts in welfare spending showed instability, frequent variations and they were inconsistent with the declared policy goals.

Due to the economic recession the government was not able to keep the share of welfare expenditures to GDP at the level of the last five years. Most of the welfare service indicators decreased. In health care, the number of hospitals was reduced from 657 to 636 between 2012 and 2015. There was a reduction of hospital beds from 106.6 thousand to 80.7 thousand. Instead, the out-patient treatment has been developed from 2,263 out-patient organizations (2012) to 2,352 ones (2015).

In the Belarusian education there was a similar situation. According to the official statistical data the number of preschool educational establishments in 2012/2013 academic year was 4,064, in 2015/2016 year their number was reduced to 3,951. However, in the same period the number of enrolled children increased from 398 thousand up to 409.8 thousand. In the 2012–2015 period the number of the primary and secondary educational establishments was reduced by 349 from 3,579 to 3,230. But despite reduction of schools, number of pupils has increased: from 928.2 thousand pupils to 969.1 thousand. During previous four academic years in Belarus two universities were closed and now only 52 are functioning. The number of the students has decreased by 92 thousand, from 428.4 thousand to 336.4 thousand.

Thus, national welfare budget was not in line with the announced policy objectives. The Belarusian government could keep its health care and public education priorities in the local budgets only

Statistical year-book of 2015. (2015). The National Statistic Committee of the Republic of Belarus. Minsk.

Belarus in figures. (2016). Statistical data book. The National Statistic Committee of the Republic of Belarus. Minsk. Retrieved 21 March 2016  from http://www.belstat.gov.by/en/ofitsialnaya-statistika/publications/statistical-publications-data-books-bulletins/public_compilation/index_4921/

[2] Еl ex (rv) = In(e2/e1)/ In(r2/r1), where: Еl ex (rv) – Elasticity of welfare branch expenditures caused by the total budget revenues; e 1, e2 – expenditures at the moment of time t 1 and t2, accordingly ; r1, r2 – revenues at the moment of time t 1 and t2, accordingly; In – consumer prices index. At an original interpretation of elasticity coefficient there is a consumer price index. It is necessary for adjustment on inflation. However, because this index is corrected both on formula numerator, and on denominator, it does not get impact on calculation result of elasticity coefficient. It is possible to accept index for 1,0 or eliminate this index in calculations at all.