Offshore companies play an exceptionally important role in the macroeconomy. As a result of the recently emerging scandals (Panama papers, Pandora papers) now they could face more attention than ever before. Despite the commonly regarded negative sense of macroeconomy, it is undeniable that it has many positive effects, especially in terms of tax optimisation, or encouraging investment. It is important to note, that offshore companies raise several questions and concepts, which require further elaboration: such as their legal regulation, the term of tax avoidance, and the blacklist (the list of non-cooperative EU countries from a tax point of view).

In recent years offshore companies have received an increased amount of attention due to various scandals. Their existence in the economy raises numerous questions: many wonders why they are not regulated more strictly, why they are legal, what are their benefits, and where the line is drawn between offshore companies and tax avoidance (i.e. when do we talk about tax optimisation and when do we talk about tax avoidance), and why their presence in macroeconomy is justified. The role of offshore companies in the macroeconomy can be very important, as they bring a wide variety of benefits if they comply with the established legal rules: whether we look at the foreign capital flows of a particular country, or even if we consider the benefits for a multinational company or enterprise.

The role of offshore companies

Offshore companies can be established in countries where local laws do not tax foreign activities since they are considered tax-free. In contrast to this, they must pay a fixed flat-rate tax yearly. In this case, we are talking about a company registered in a country, but does not carry out any activities there, therefore not making any income in that country. The reason for this is that entrepreneurs or companies want to optimise their tax burden by avoiding what they consider to be too high in their own country. To achieve this, they mostly operate in tax havens with low tax rates: e.g., Bermuda, Andorra, Bahamas, Cayman Islands etc. Favourable tax conditions are not the only reason for the tax haven title. In addition, the following conditions also contribute to the ability of such areas to operate as tax havens: minimal bureaucracy, confidentiality, discretion, special legal guarantees, and modern infrastructure (whether in telecommunications or banking etc.) (Offshore.net 2022). Low tax rates can be eliminated by the introduction of a global minimum tax, which Hungary was the only country to veto, but which will probably still be applied.

However, to see the importance of offshore companies for the economy, we need to look at foreign capital flows. If we take Hungary as an example, then from the data we can conclude, that the foreign capital flow in the country is at a very high level: 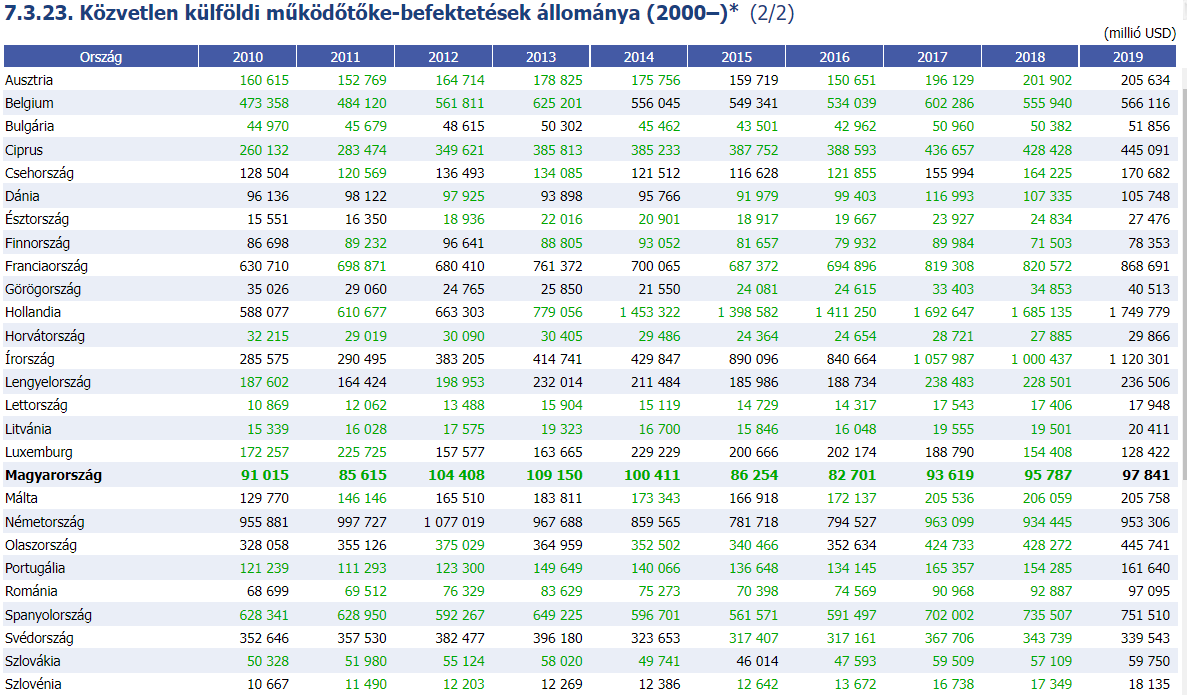 In my opinion offshore companies (in addition to other major factors) play an important role in increasing foreign capital flow, which is imperative for the functioning of the world economy.

aa)     in which the taxpayer alone or jointly with associated enterprises

aaa) hold more than 50% of the voting rights, or

b)         be a foreign establishment of a domestic taxpayer, where the establishment pays less than 4.5% corporate income tax for the tax year (Adó Online 2017).

The law also declares several points when the conditions are not met, i.e., when we are not allowed to define a company as a supervised foreign company.

In addition to the legal regulation of the supervised foreign companies, the list published by the European Union (Europa.eu) also contributes to the regulation of offshore companies: the countries on the list do not cooperate on tax issues and do not take adequate actions against e.g., tax avoidance and tax fraud (Crystal Worldwide 2021). Practically speaking the list is a negative visual tool, and it is naturally not in the interest of any country to be on. There also exists a grey list, which contains countries that do not meet the criteria, but are trying to meet the requirements and have taken steps to do so. Therefore, the grey list can be viewed as a transitional list.

The purpose of the blacklist combat tax avoidance and tax fraud not just on a member-state level, but also on an international level, therefore providing the primary conditions of fair taxation. The list is not intended to shame the countries, but to guide them towards positive change, and initiate a consensus among the countries on it. To be labelled as a cooperative country from the taxation point of view, the following conditions must be met: e.g., jurisdictions must ensure the exchange of tax information on request. jurisdictions must provide information exchange with the member states in the way of AEOI (Automatic Exchange of Information) or CRS (Common Reporting Standard), etc. The list was last updated on 24.02.2022. At this time the countries on the list included Samoa, Fiji, Panama, Guam etc. Once the list has been established, updating it proved to be an important task, as countries are constantly added and removed, and the following activities must be carried out: keeping in touch with the countries on the list, updating the criteria, monitoring the changes performed by the country, screening the countries etc.

Overall, the use of the offshore blacklist provides countries with an opportunity to gain insight into countries that are not cooperating on tax issues and provides a uniform set of criteria, which makes it transparent to the countries on the list which criteria they must meet to be off the list.

Regarding offshore companies, it is important to note that a company reporting their profits to a country with a lower tax rate is not illegal. Tax avoidance is therefore not easy to define since tax optimisation is still considered a legitimate act. However, an essential element of tax avoidance is also the taxpayer’s attempt to find the most favourable tax conditions. This activity becomes illegal when it is carried out in a way that is contrary to the law. We can distinguish between several types of tax avoidance (Krekó & Kiss 2008):

The definition of tax avoidance is therefore widely used: it includes legitimate tax optimisation activities, but also illegal tax avoidance activities, including tax fraud. To see the real threat of tax avoidance, we need to look at the purpose of taxation itself. The main objective: is to provide public services, the main element of a public financial redistribution system. Taxes are a major source of revenue on both local and central levels. Therefore, it follows that taxes affect not just economic, but social relations as well. Tax avoidance can therefore be problematic because it can lead to horizontal inequality and provide unfair competitive advantages to those who avoid tax, in contrast to those who do not, and because it also undermines the efficiency of the tax system, as the unequal access to tax leads to unequal redistribution. Estimating the extent of tax avoidance and the potential loss can be problematic, as in some cases the actual turnover and revenue can be concealed (Krekó & Kiss 2008).

Overall, I believe that the definition of tax avoidance can be widely interpreted, although the practical use of it can lead to social issues in some cases, and it can also weaken the tax system and reduce tax morale.

Overall, offshore companies play a relevant role in the macroeconomy. Offshore company formation can be beneficial for entrepreneurs and multinational companies as well, because of tax optimisation and several other reasons, as for the whole economy, it can have a positive impact on foreign capital flows. In addition to the advantages, there can also be disadvantages in the case of illegal tax avoidance. The legal framework for offshore companies exists both at the member state level – in this case, Tao. tv – and at the EU level (Offshore blacklist).

9 November 2022 (euronews.com)
'While they are profiting, the planet is burning': 5 key takeaways from the third day of COP27

5 October 2022 (euronews.com)
EU-wide common charger for mobile devices to become a reality in 2024

23 September 2022 (euronews.com)
Hungarian minister meets Russia's Sergei Lavrov despite EU 'understanding' not to do so

11 July 2022 (euronews.com)
Boris Johnson resigns as UK PM but stays in power until a successor is chosen

Recent developments in the Article 7 proceedings against Hungary and Poland
CJEU: national principles of procedural law cannot preclude courts from reviewing potentially unfair terms in consumer contracts
What Comes Next in the Fight against Fraud? – Questions Arise over the Transposition of the PIF Directive
Tax ruling: Advocate General Priit Pikamäe urges the Court to annul the judgment in the Fiat State aid case
European Parliament declares Polish Constitutional Tribunal illegitimate in the face of threat to the primacy of EU law