Feasibility of green auctions in the Marosszög, Hungary

A major goal within the reform of the EU Common Agricultural Policy (CAP) is “greening” of farming activities. Adopted with the 2013 CAP Reform, greening aims to motivate farmers to adopt and carry on farming practices that are also environmentally beneficial. Since markets alone do not reward these activities, CAP provides direct incentives via green payments. Farmers who receive an area-based payment have to adopt specific measures that benefit the environment and climate. Participating farmers have to choose from the following measures: 1) they can diversify their crops, 2) they may choose to maintain permanent grassland or 3) they can dedicate 5% of their arable land as “ecological focus area”, while giving up intensive farming here.

With a case study within the EU FP7 funded EPI Water project, we examined the feasibility of satisfying the third criteria via an economically efficient cooperation among farmers in the Marosszög area in the South of Hungary.

Figure 1 The average water cover within the Marosszög 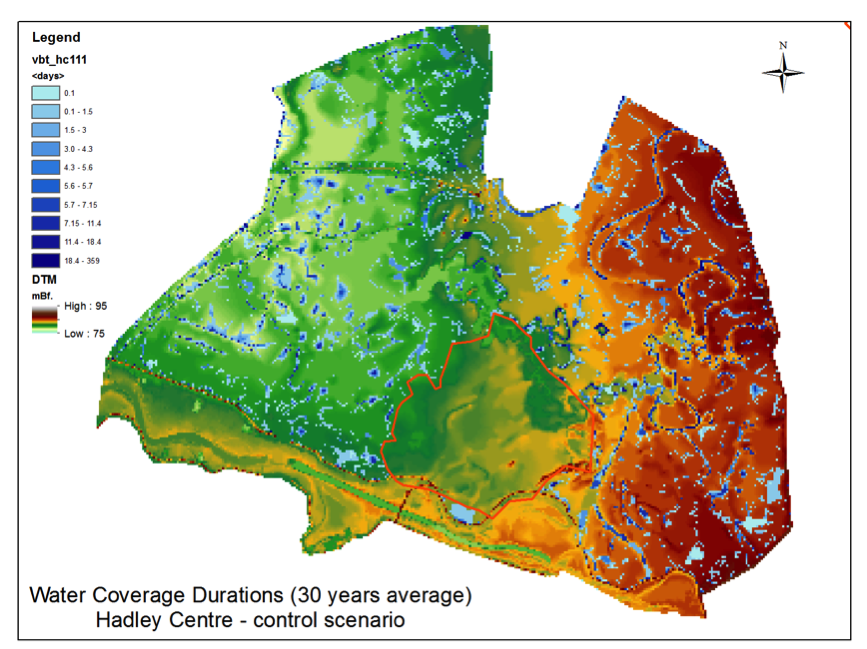 At present almost all of the area within the Marosszög is cultivated. There are various pieces of land in terms of quality and agricultural productivity. Some farms are adequate for intensive vegetable farming by using developed irrigation technology, while at the other end of the spectrum there are farms that are barely worth cultivating and the only real reason for farming is the annual receipt of area-based CAP subsidies. The latter farms are often situated in low lying areas subject to excess water inundation in case of wet weather, generating substantial costs of draining the water or prompting to give up production for the entire year in question.

If greening through “ecological focus areas” is introduced in the Marosszög that would imply that each participating farmer would need to give up production on 5% of its land, whether that land is of superior or inferior quality. The case study in question examined if farmers are willing to cooperate in the common fulfilment of the 5% goal. It means in practice that farmers with more productive land would continue to use all of their area, while paying for farmers with less productive land to give up production on the productive land users' behalf as well.

Within the case study an “auction game” was developed and run in which participating farmers bid their land for greening. By greening we meant land use change from intensive arable land to some other, more environmentally beneficial use, such as fallow, hedges and trees, buffer strips. The unit of the bids were HUF per hectare per year, the amount of money in exchange of which a farmer would give up cultivation of its land for the benefit of others, i.e. of those who would not have to introduce greening on their own land.

The auction exercise was held on 24th January 2013 at the Farmers’ Association of Makó. 22 farmers with total cultivated land of 1778 hectares participated in the exercise, a little less than 20% of the case study area.

From the bids a supply curve was constructed showing the marginal cost of land use change. This curve helped to determine the equilibrium price of converting the required number of hectares. The farmers whose bids are accepted receive this equilibrium price for each hectare. The compensation is paid from a fund to which the owners of unconverted land have to contribute, equally after each hectare.

The results of the game were shared with the farmers, together with the analysis of the spatial pattern of the bids. A number of conclusions were derived from the exercise:

1. Less productive lands (those that are regularly covered with water inundation) were offered at the lowest cost and more productive pieces of land fetched much higher bids. The spatial pattern of the results corresponded well with the hydrological model based categorisation of land area from the perspective of water inundations.

2. Adaptation by the scheme would result in a substantial decrease of adaptation costs compared to a process when each farmer acts individually. (The calculated adaptation cost saving for the participants at the study site would have been 38%.)

3. Once farmers understood the mechanism, they were absolutely willing to cooperate with each other on finding mutually beneficial solutions to satisfy greening requirements together.

4. The auction – if implemented in reality – has the potential to improve the economic position of all participating farmers compared to individual fulfilment of the 5% ecological focus area requirement.

5. Detailed implementation of CAP greening is to a large extent an internal matter of the EU Member States. Given the above results, policy makers should make sure that common implementation can be pursued.

6. Even if common implementation as an option is available, farmers themselves may not recognise that they should cooperate to reduce overall costs of adjustment. Therefore external catalysts – such as providing a tailor made auction system – may be necessary for smooth and efficient implementation.

27 May 2021 (hungarytoday.hu)
Watered-Down Housing Act Still Unacceptable for Many [K.V.]

Amazon won, but Engie lost the court appeal in Luxembourg tax cases
Advocate General: national legislation or judicial practice precluding judges from referring questions to the Court of Justice is incompatible with EU law
CJEU: The Hungarian and the Polish progressive taxes do not infringe EU law on State aid
CJEU: The tax scheme of four Spanish football clubs constitutes State aid
ECJ: Hungary’s restrictions on the foreign funding of civil organisations do not comply with EU law