Are the Hungarian tertiary education institutions autonomous, independent entities or are they controlled entirely by the state? This hypothetical question has been asked continuously ever since the democratic transition of Hungary because each government tried to change something about the legal status of Hungarian tertiary education. However, the main problem with this is that they have done so without a long-term higher education concept; besides, it can also be seen that the autonomy of Hungarian universities and colleges has been getting reduced with minor interruptions from government period to government period.[1]

This year, the government decided on the transformation of the mode of operation of seven Hungarian higher education institutions, which many see as a further reduction in autonomy. In my publication, I deal with this issue and after it is presented briefly, I will bring pro and contra arguments both for and against the transformation of the legal status of concerned Hungarian universities.

A pilot model for transformation – the Corvinus University of Budapest

The Government first decided on the transformation of the Corvinus University of Budapest in 2019. The law regarding this was passed by the National Assembly in 2019. According to the law, Corvinus became a foundation under the central budgetary institutions and management powers of the university went to the Board of Trustees appointed to the helm of the foundation.[2]

The Corvinus model was intended by the government as a pilot project, and it was not sure if the application of the model would be extended to the entire Hungarian higher education system.[3] Recently, it has become obvious that not only was this model a pilot project, but it was the sample for the transformation of the legal status of other universities as well. In 2020, the legal status of a further seven Hungarian universities[4] was changed.

Under the change, in private universities, the maintainer -that is to say, the Board of Trustees- accepts a budget, an annual report, the organisational and operational regulations, an institution development and asset management plan of the institution. Furthermore, if in private universities, the statutes of the foundation are different from the provision of the law, the maintainer can submit any Rector candidate[5] to the President of the Republic and is only required to ask for the opinion of the Senate[6], as opposed to public universities, where the minister can submit only the Rector candidate elected by the Senate to the President of the Republic.[7] Therefore the powers of the Senate will be reduced to academic issues in the private universities.

Despite the change, the state maintains state financial aid[8] which means maintaining the same number of student places as under state financing; meanwhile, institutions will also get assets to operate, especially in the case of Corvinus, which received assets of significant value, as 10% of MOL and Richter shares was given to the university.[9]

However, the government does not finance them further from the annual central budget. Instead, the government will sign a long-term framework contract on their financing for a period of 10-25 years and within this it will also sign a short-term framework contract for a period of 3-5 years. Although the exact extent of the state financial aid is not yet known, the amount, even if it is not reduced, will most likely not be raised.

The reasons for model change – arguments pro and con

As can be seen, there is a lot of uncertainty about the model change, therefore it is worth looking at the arguments for and against it. I will start with the ones for it. The first reason for the change is following foreign examples, as several of the top 100 universities in the world also operate as foundations; furthermore, universities being transformed into foundations is a global phenomenon.[10]  The idea of the Corvinus model also comes from abroad.[11]

The second reason is predictability. According to the Minister of Innovation and Technology, this change can contribute to a long-term, predictable management[12] and allow these institutions to acquire sources more effectively from the private sector.

Another reason is related to university staff. The change will also affect university employees’ legal status. After the transformation, the employees will no longer be public servants, but will instead be private sector employees, whose legal status is no longer regulated by the Kjt.,[13] but by the Mt.[14] The reason for the change in the legal status is that the Mt. is more flexible than the Kjt. The other reason is that in the case of establishing a private sector employment relationship, the parties are free to agree on the employee's salary,[15] as opposed to the Kjt., where the public servant’s salary is determined by the wage grid. Thus, a private sector employment relationship allows the parties to agree on the salary which is either higher or even lower than the salary that would be payable under the public servant wage grid. According to the justification for the amendment, the higher salary would allow the best professionals to teach at the university.[16]

Concerning private capital financing, it is also interesting to look at the higher education of OECD countries and the proportion of tertiary education that was financed by the private sector and the state in 2016. This is illustrated in Tables 1 and 2. 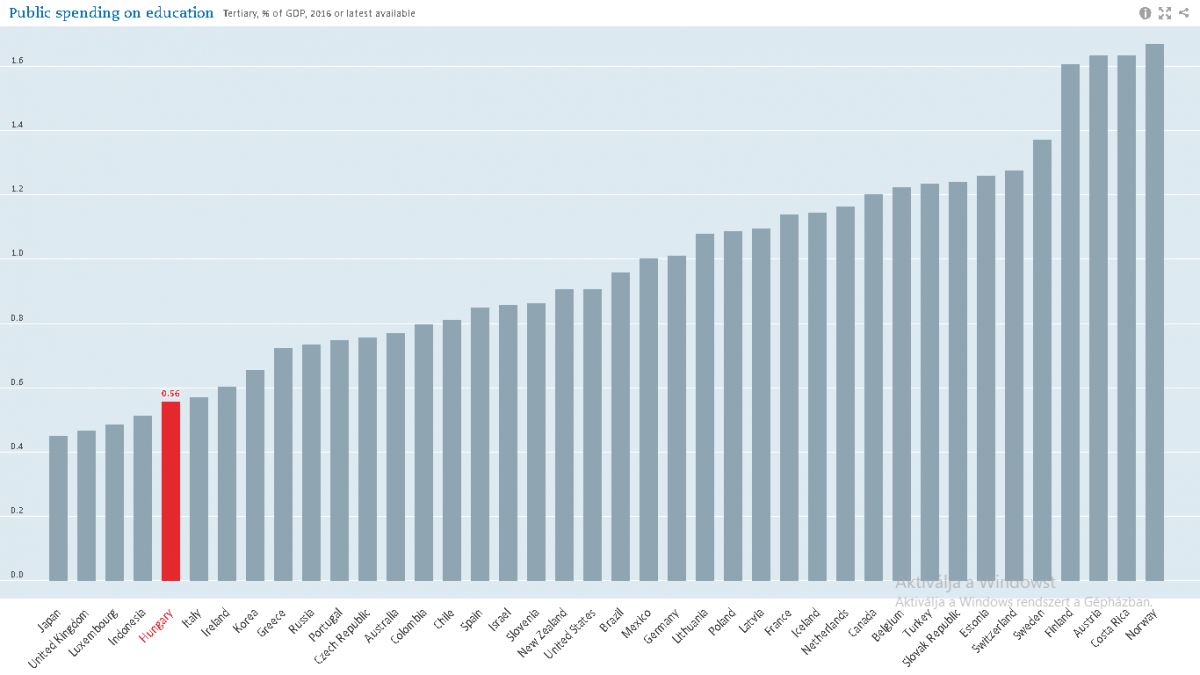 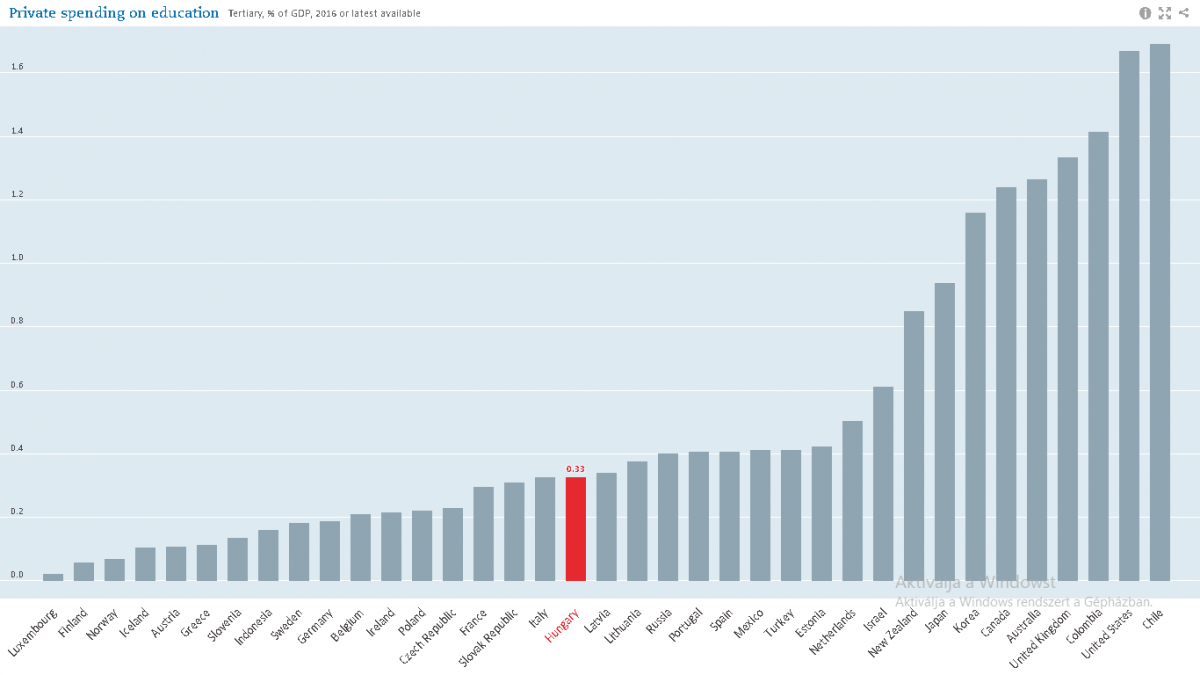 In respect of financing from the private sector, Hungary (0.33% of GDP) is in the middle of the ranking of OECD countries, but lagging behind leading countries by a larger extent than in the case of public financing. In this regard, the top two countries on the list are the USA (1.67% of GDP) and China (1.69% of GDP). However, it is also important to emphasize that Hungary is higher in this ranking than in the previous one, because in recent years several courses have become self-financing (which also qualifies as financing from the private sector) and not because of companies playing a relatively larger role in the financing of higher education.

In addition, it should be noted that, according to some Hungarian authors, the share of private capital should be increased in the financing of Hungarian higher education.[19]

If the ratio would shift in favor of the former, it could have, among other things, the effect of further increasing social inequality, as students from financially struggling families would not choose courses or universities where tuition fees are required.  However, the introduction of tuition fees has become more frequent as a global tendency.[20]

Another counter-argument to the model change is related to management and predictability. What makes the model change unpredictable is that it is not a long-term solution, as it is not the result of a consensual agreement between the government and the parties concerned or the opposition parties,[21] but only the unilateral will of the government. Unfortunately, not only does this governance practice characterize the recent situation, but it also characterizes the Hungarian higher education policy after the democratic transition, as the successive governments would compete with each other rather than cooperate and, because of this, a long-term concept of Hungarian higher education was not developed.[22]

A further criticism based on predictability is that reliance on private money can cause more uncertainty for universities as private funders are less secure sources of revenue than state financial aid. For example, Corvinus, which has received 10% of MOL's and Richter's shares, may be more exposed to market conditions and uncertainty, as share prices may fluctuate quickly.

Apart from the shares that were given to Corvinus, the promised private funding has not been received by the affected universities yet, however, as I have already mentioned, it takes at least 3-5 years for the market to react to the model change.

Another criticism is that marketing may not be the best solution in each case. For marketing to fulfill its promise, more factors are necessary. First, the discipline should provide marketable services, the university must have adequate infrastructure and the management of the university must be involved in the transformation. Thus, marketing may not be an appropriate solution in each case, as a certain discipline may not be able to provide marketable services (e.g. social sciences) or it may be precluded from providing them due to lack of access to the appropriate infrastructure. The third factor is also relevant in connection with the Hungarian solution because the government decided on the model change without the consent of the management of most of the universities involved and even maintained this decision in spite of serious protests related to SZFE.[23]

In addition, the most important counter-argument in connection with the model change is that the autonomy of universities will be further reduced, as the powers of the management -the Senate- of the university will be reduced to academic issues and the most important decisions will be made by the Board of Trustees of the foundation.

This is also important in terms of autonomy because the members of the Board of Trustees were appointed by the Minister of Innovation and Technology and the members close to the governing party are predominant.[24] For this reason, the influence of the state in the operation of higher education institutions would increase further.

After listing the pros and cons, it should be noted that the reduction of university autonomy has not only become an issue since the regime change, as the autonomy of Hungarian higher education institutions has gradually decreased since 1989.[25] Nonetheless, in my opinion, the reduction in autonomy has been greater since the 2010 change of government, as the management autonomy of universities and colleges was practically terminated. According to the recent constitution of Hungary – the Fundamental Law of Hungary –, “The Government shall, within the framework of the Acts, lay down the rules governing the management of public institutes of higher education and shall supervise their management.” [26] This practically means that universities cannot take loans, pass their budget or make decisions concerning their property independently, therefore they should operate without management autonomy.[27]

In conclusion, in my opinion, the transformation will further reduce university autonomy, as the Senate composed of the elected representatives of university staff will have less significant powers. However, change can also have positive effects, such as an increase in predictability due to the long-term support framework contracts and greater opportunities for the acquisition of private funding; furthermore, pursuing a university teaching career may become more attractive as a result of an agreement on higher wages made possible by private sector employment contracts. Nevertheless, it is important to emphasize that for the change to have a truly positive effect on the functioning of the universities concerned, the government must make its decision on the model change in cooperation with the management of the universities; most importantly, it should not force any changes that go against the will of those affected by them.

[5] The Rector is the leader and high representative of the university. The Rector candidate is elected by the Senate and the elected Rector is appointed by the President of Republic. -https://www.pecsma.hu/pte/ki-az-a-rektor-ki-az-a-dekan-mi-a-szenatus/ (2020.10.25.)

[6] The Senate is the decision-making board which is composed of teachers and researchers of the university, the Rector and the Chancellor. -https://www.pecsma.hu/pte/ki-az-a-rektor-ki-az-a-dekan-mi-a-szenatus/ (2020.10.25.)

[11] “The idea was taken from Finland, where some universities are state-run, while other universities have previously been suggested by the state that if they merge, they rationalize their operations, they can operate in a freer, foundation form. Such is the case, for example, with Finnish Aalto University, which was created by merging universities and colleges of technical, economic, and applied arts, which has gained significant market resources and now is trying to stand its ground in international competition.”

[13] Kjt. is an Act which regulates -among others- the legal status of public servants

[14] Mt. is an Act which regulates -among others- the legal status of employees

[15] But the wage cannot be less than the sum of the mandatory minimum wage and the guaranteed minimum wage set by the Government.