Despite the drastic political changes in some Central European countries, local governments are still in the focus of public sector reforms in the broader region. Decentralisation has many faces: countries follow different patterns by sub-regions and in a single country also the devolution methods are transforming with time. In this note I will briefly discuss the recent reform waves in the East European region.

The European transition countries can be grouped by three–more or less distinct –economic-political regions. These geographical areas are different by the level of economic development, some of themhascommon history andidentical ethnic roots. All these factors led to similar administrative traditions and government structures. So intergovernmental relations and public servicemanagement are comparable in the sub-group of Central European countries (including the Baltic region), in South East Europe (the Balkans) and in the narrow stripe of Eastern Partnership countries, as these former Soviet Union countries wererecently identified by the joint EU initiative.

In all the three sub-regions the first stage of decentralization coincided with the political transformation and the economic changes. These countries aimed to move away from the previous system of state ownership and planned economy operating under the single party political control.  However, this common origin did not result identical development paths. Status of elected local governments and management of municipal services were based on different constitutional principlestranslated into diverse territorial administrative structures and with unique forms of fiscal decentralization.[1] The country development patterns can be also categorized by the scale of adaptation tothe Western decentralization models: CEE closely followed the same principles, SEE was reluctantly adapting and the former Soviet-Union countries were classified as clearly non-adapting ones (see T.M. Horváth, 2007).

Following this first decade-and-half long legislative and institution building period, the key legal, administrative and basic fiscal conditions of the local government systems have been formally set up. It was often a painful process, hindered by armed conflicts, revolts and sudden government changes. But the critical conditions of local government systems have been hammered out. For example the former ambiguity in the constitutional status of local self-governments have been clarified by separating the local matters from the implementation of delegated services. Or the position of the chief administrative officers was defined by being a local manager subordinated to the elected councils, instead of representing the central administration as a governor.

Relationship between tiers of local governments have been also clarified by separating the municipal budget from the territorial ones (abandoning the Matryoshka model). Special asymmetric decentralization models have been developed, such as the revenue sharing methods for the semi-autonomous entities of Adjara (Georgia), Crimea (in Ukraine before the Russian occupation), Gagauzia (Moldova), Voivodina (Serbia) or in the Bosnia and Herzegovina state. The basic features of fiscal decentralization have been developed on the revenue side, by establishing manageable local property tax systems, introducing revenue sharing schemes and making grant allocation more rule driven and formula based (see for example the legislation on local finances in several countries of the former Yugoslavia).

These decentralization models were painfully tested by the financial crisis of 2008/2009 and the following economic recession. Local governments in all these countries were hit hard by the consequences of the economic downturn. Own and shared revenues declined, there were severe cutbacks in national budget grants, local government debt increased and demand for  local social and welfare services enhanced.

However, local governments were mostly able to respond on these challenges. They contributed to national policies aiming to cope with the fiscal crisis (CoE report, 2011).  There were numerous attempts to improve municipal service management through rationalization, cooperation of private and public entities of various types and tiers. Large scale energy efficiency programs were launched, local economic development programs were implemented in cooperation with the national government. This period showed the first results of territorial amalgamation (e.g. Denmark) and laid the basis of future reforms in reducing the number of municipalities (Albania, Armenia, Georgia, Finland, Greece, Latvia) or promoting inter-municipal cooperation (Hungary, Ukraine).

Using the generally accepted decentralization indicator – local expenditures in % of GDP –  countries of the region are still rather different by the scope of locally managed public services.  (Chart 1)[2]. They are mostly below the European Union average (11.1%). There are countries like Belarus and Ukraine where the official fiscal statistics even do not separate the locally provided services and the functions managed by local self-governments. So it gives the false impression of high local autonomy in these countries. At the other end of the spectrum are the countries with limited local funds (e.g. in Azerbaijan only the national budget transfers are measured, as the local expenditures are even not separable). 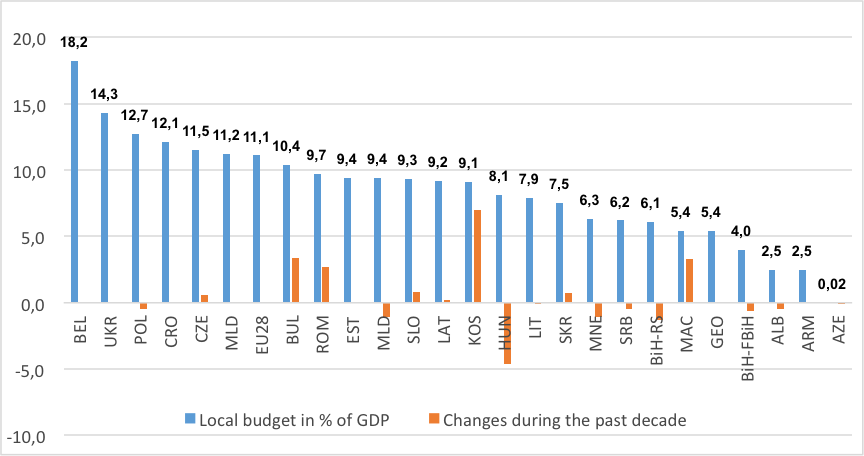 In Central and Southern Eastern Europe the decentralization trends continued mostly in the European Union member countries. This indicator also reflects the increase in the EU funds allocated through local governments. In the Balkans there were ongoing reforms in some countries (Kosovo, Macedonia), but in the other cases share of local expenditures remained mostly stable. The only visible exception is Hungary with a striking centralization program started from 2011 (see above).

Countries of the three sub-regions make various attempts to adjust their local government systems to the new economic and financial conditions. There are ongoing changes in the Western, modelled part of Europe, as well: completed amalgamation reform in Denmark, reallocation of health care and education service in Finland, Denmark, search for new roles of the intermediary tiers of government in France and the UK. Western and Central European countries also responded on the systemic challenges in public service management by strengthening the role of the state.

In the Balkans there is an ongoing fiscal and territorial amalgamation reform in Albania. The other countries also go through a gradual transformation by increasing own source revenue potential (Bulgaria), modifying the revenue sharing rules (Bulgaria, Montenegro, Serbia, Slovenia) and the grant allocation techniques (Bulgaria, Macedonia, Montenegro, Romania, Serbia), enhancing the local responsibility in public financial management (Croatia)[3].

Among the Central-Eastern European countriesin the period of 2011–2014 Hungary has completed a reform contrary to the overall trends: here key human services were centralized and local financial management autonomy was decreased. It was in line with the overall political transformation of creating an illiberal state in a country where decentralization has never been sufficiently rooted in public service management and governance.

The past decade proved that transition countries started to move away from the adapted decentralization pattern of the first 10-15 years of transition. Presently the ongoing reforms do not aim to follow any Western models. There are no more unrealistic hopes of finding an “ideal” solution to their domestic problems. But these countries experiment with institutions and techniques, which might fit the best to the their own circumstances. They try to respond on the present specific problems partly originating from their imperfect local government systems and partly caused by external economic factors.

In this new era direct transfer of management techniques and adaptation of models will not work anymore. Decentralization reform in the regionis an ongoing adjustment process, when new developments are mainly corrective measures responding on the mistakes made in the previous stages or steps introducing the missing elements of  a proper local government system.

So in this period it is very important to clarify the rules of decentralization and to identify which principles survive under these specific models. The main goals of local government reforms remain the same: they usually search for rational size of localities, promote participation, aim clear separationof responsibilities and functions, create transparent and regulated intergovernmental fiscal relations, establish fiscal incentives for revenue raising and efficient management of municipal resources.

But the basic question beyond all these efforts is whether decentralization works and the doubts on its favourable impact can be eliminated? A recent study on surveying the impact of fiscal decentralization draw rather ambiguous conclusions. This careful cross-country comparison and literature review proved that fiscal decentralization had favourable and inevitable positive impact on allocative efficiency, macroeconomic stability, fiscal sustainability and social capital, only. All other expected consequences, such as promoting growth, influencing income inequality and geographical disparities, government size, accountability, tax morale, national unity, voter turnout showed mixed or contradicting results and partially depended on other endogenous factors.

These contradicting conclusions from the global review of fiscal decentralization policies proved that the success of decentralization programs is very much determined by the actual development stage of a country. So the appropriate methods of establishing new intergovernmental relations depend on the moment of governance reform process. The means and the tested techniques are already available, but the real art and science of policy reforms is to identify those instruments which will work.

By responding on an acute problem they are usually able manage only one issue at a time. The selected method in turn might create another problem, but that does not mean that the concept of decentralization is wrong. This spiral development in learning and adapting decentralization policies has to be accepted and the local government, as an institution should not be dropped out of the window. There is no one single magic solution for all the complex problems of governance and public service management. But the rules of public administration and public financial management should be followed in this never ending story.

[1] Titles of the first comprehensive analyses of these local government models from the early 2000s are rather telling: Decentralization: experiments and reforms (Central Europe), Stabilization of local governments (the Balkans) and Developing new rules in an old environment (former Soviet-Union countries).

[2] Sources of data: Eurostat for the EU member countries (2005 and 2015); for the Balkans Fiscal Decentralization Report for SEE 2006-2014. In the Eastern Partnership region the country reports are from the Local Finance Benchmarking project (2014 or the latest available data), but here no comparative data were available.