PPP projects in Belarus: does it breakthrough in public services

Nowadays a PPP concept is quite widespread in a circle of statesmen, legislators, representatives of business and experts in Belarus. What is it: fashionable name, craze or real need for a present economic life? The latest events in Belarusian economy and finance vividly show that the PPP role becomes even more demanded and urgent. It interests scientists, practitioners, experts to explore PPP's experience both in EU and Post-Soviet countries and to use all its positive in infrastructures’ development and public services providing.

Why PPPs need in Belarus?

In condition of recession Belarus is faced with challenges one of which is need of capital investments in modern infrastructure under the very limited opportunities of the budgetary funding. Moreover, the tendency to decrease of budget funding is traced in recent years. According to the governmental infrastructure plan the share of infrastructure investment to GDP is reducing every year. If in 2006 this indicator was 1.2 percent, then in 2014 – 0.8 percent. It indicates the need to search new funding mechanisms for infrastructure projects. It mechanism should improve the living standards of population and maintenance of social standards level in comparison of last years. In the long term till 2020 the funding needs for creation of infrastructure facilities are estimated at $17.9 bn., and from 2021 to 2030 – $50.5 bn.

As the figure shows, an annual average gap between infrastructure investment needs and budgets’ capacity to fund it during 2016-2020 will be planned $1.57 bn., and during 2021-2030 -$ 2.41 bn. It is expected that the gap of funding should be covered by means of PPP projects. Thus nothing remains how to go on the way of financing by means of PPP’s.

Currently only seven from 63 submitted PPP projects will be implemented: two for road infrastructure, two for thermal and electric energy and three for welfare sphere (see Table 1). 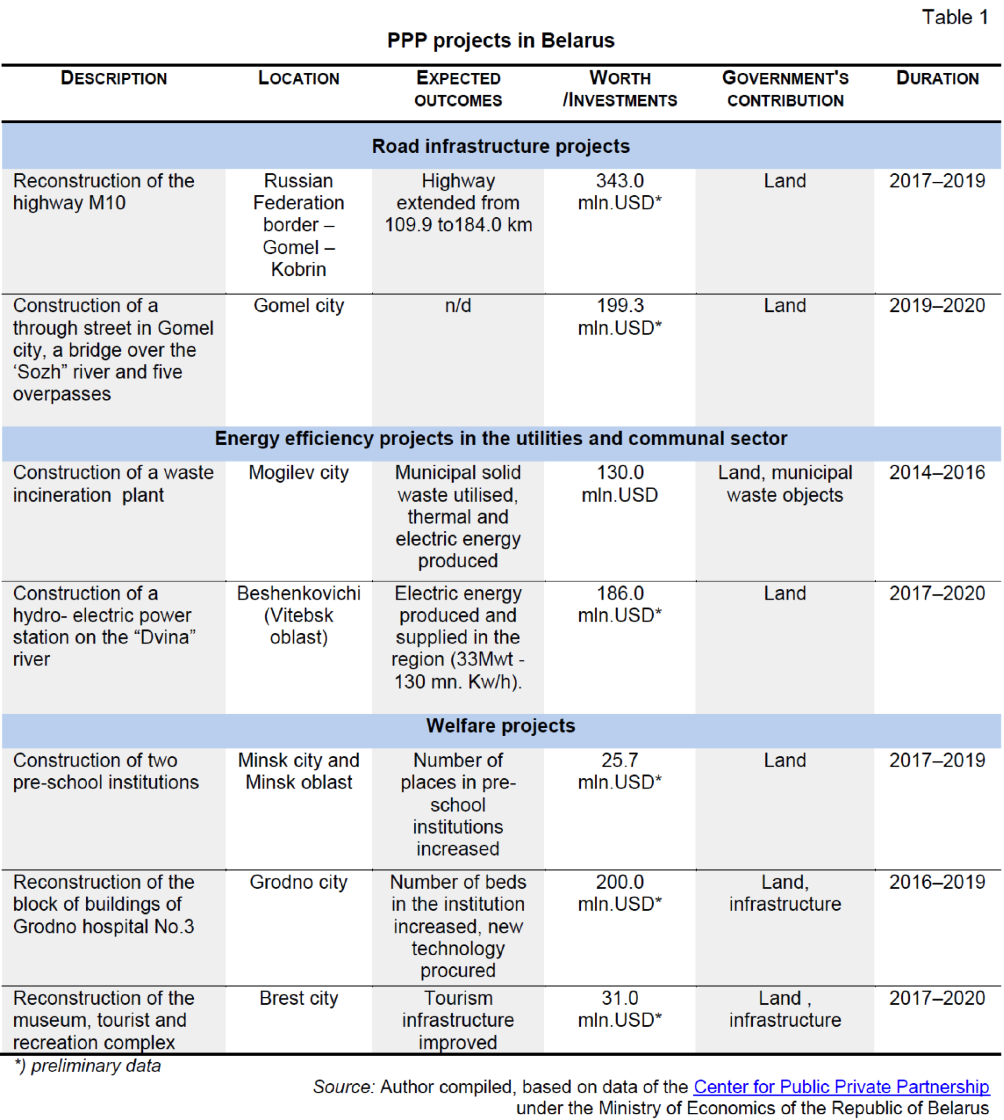 The table above characterizes the pilot projects only which capture 27 percent of the national infrastructure plan of Republic of Belarus for 2016–2030. These figures give an essential optimism in infrastructure development by means of PPPs.  It should be noted, however, the PPP pilot projects started in 2014-2016, therefore it is too early to provide any comment on them but some preliminary analysis of success factors and components may be done. However, there are risks of PPP projects to be failed due to deterioration of investment climate in Belarus where foreign investments for 9 months of 2016 are decreased on 2.4 bn. USD in comparison with the same period of 2015.

Progress and shortcomings in PPPs

Some progress in developing the legal and regulatory framework of PPP is evident – The Law on public – private partnership  which has been adopted by the Belarusian Parliament in the end of 2015. The Law on PPP includes forms and spheres of implementation of partnership, obligation of partners, sources of financing, a guarantee of the rights of partners, mechanism of replacement of the private partner in case of his inability to fulfill the obligations, without terminating agreements, settlement of disputes, etc.

Some changes on regulatory environment of PPP have been brought by the recent additions to the Budget Code of the Republic of Belarus. Now from local budgets of different levels: oblasts, rayons, urban and rural budgets an infrastructure projects and programs concerning PPP can be funded. It gives a good ground for adoption of independent decisions for PPP’s projects implementation at all local levels.

However, some shortcomings about Law should be highlighted. Firstly, the Law is submitted very generally and has enough problematic issues and bottlenecks. There is no legislative explanation of PPP’s types, ways and models. Secondly, PPP formation procedures are insufficiently accurately registered, tariff regulations need to be enclosed in the normative documents. Thirdly, the legal regulation of a concession contract has not been changed and it is regulated now by the Investment Code through a specific concession agreement and not the Law on PPP. This issue is particularly important for private partners and needs to be complexly regulated by Law on PPP. It would be guarantee good relationships between government and private partner in terms of expenses and outcomes, for example, in sales, costs and profit sharing, taxes, other payments.  In – fourth, no progress in risk management has been noticed so far, hence it is difficult to speak about improvement of relationship between the partners. The rearrangement of the obligations and risks between the parties should not focus on the private partner, only. Government should not limit itself to transfer land for construction or to supply of municipal waste, it should be involved in all cycle of production as an equal partner. Table 2 summarizes all progress and shortcomings in PPP’s development.

Obstacles are to be overcome

In addition to the shortcomings it should be focused on obstacles to PPP's formation and management. They are:

Source of the photo on the front page: 'First pilot PPP project “M10 Road Reconstruction” will launch in March 2017', available at pppbelarus.by/eng/news/301.html